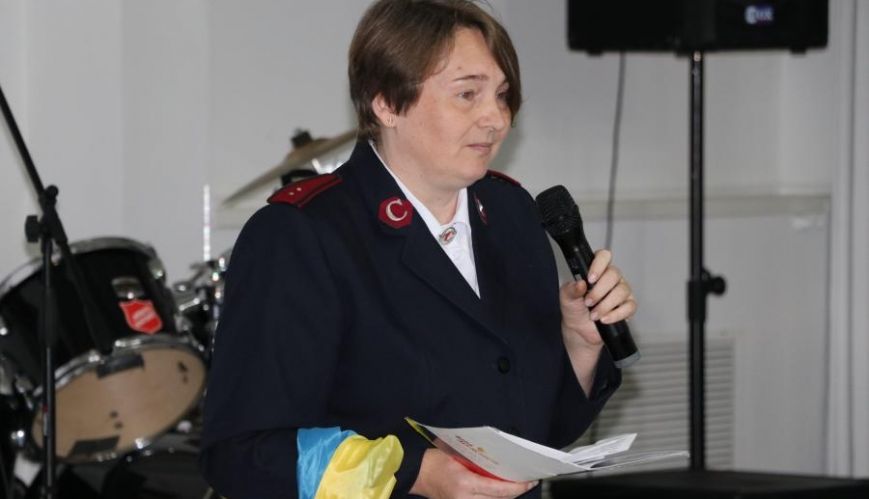 Captain Svetlana Bochkareva is the corps officer at Pesochin, a suburb in Kharkiv, Eastern Ukraine, only 40km from the Russian border. This city has suffered relentless missile strikes, drone attacks and shelling since the Russians invaded Ukraine on 24 February. Critical infrastructure has been destroyed, and much of the city lies in ruins. Thousands of civilians have fled the city, and thousands more have been killed and injured. On the first night of the war, Captain Bochkareva opened the corps as a bomb shelter. She continued to lead services there on Sundays, like many other officers in their buildings across the country.

Captain Svetlana shared some of her story, translated below, during the visit of General Brian Peddle and Commissioner Rosalie Peddle, to the Army’s Eastern Europe Territory last month.

I have been serving God as a Salvation Army officer for 14 years. From my experience, a person’s life can be divided into different time periods defined by certain circumstances. Each period brings a life lesson, or maybe a few. And the results of these lessons are recorded in the heart and mind of a person, which in turn influence future life choices.

War is a new period in my life now. This war (with Russia) is a huge concentration of confusion, suffering, pain, loss, grief, terror, doubts and disappointments, fear, rebellion and rejection. And yet it is important not to focus on yourself and what is happening but to continue to look to and hold onto God. When you don’t understand what is happening around you, it can be hard to take in and respond. But we must remember that God is within us, and he wants us to respond.

A word from God

In every period of my life, the Lord reveals a special word for me. For now, he has brought Isaiah 55: 11: “So is my word that goes out from my mouth: It will not return to me empty but will accomplish what I desire and achieve the purpose for which I sent it.”

Now there is a war in Ukraine. A terrible period, even if you are not personally experiencing it. A period that requires faith and courage. But these words of God tell me this is still a time of grace. And God’s word will not return empty.

People are confused at this time in Ukraine, and many have lost everything. They look for someone or something to believe in, or they turn away from everything. And we can offer the One who came to save them. Sometimes, when the rockets fly, and people are impacted, it’s hard to know how to help them. But God is showing me, and his love continues to work through us to people who are hurting and don’t know whom to trust. We can offer genuine help and love. People can trust us. 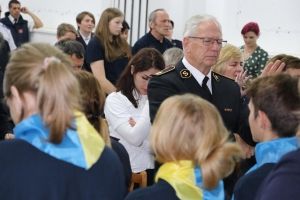 So on 24 February, the day the war began, I opened the basement of our corps building as a bomb shelter and for those who had already been bombed. People were afraid, distressed and crying. Children sobbed. They needed shelter. And although I knew that this basement could become a common grave, I opened it, hoping that God would provide. We had a warm place to sleep, and we had water and food. The building quickly filled.

I knew that no amount of trying to calm people would help. Fear and horror filled their souls and consciousness. So, although I have hearing problems, I began to do what my spirit wanted – I began to sing Psalm 23, praising God.

The love of God

I sang and prayed out loud all the time the bombing lasted. I hoped that fear and doubt did not show in my eyes and voice. And I started with:

Amazing grace! how sweet the sound,
That saved a wretch; like me!
I once was lost, but now am found,
Was blind, but now I see …

I continued to sing the entire song, and I saw how people calmed down, despite the shaking building, and the children fell asleep. Instead of focusing on the bombs, they focused on the love of God.

Worship did not stop. We studied the Bible and prayed. We took care of the children. We listened to the children’s stories, telling us about those killed. It wasn’t easy to hear these stories. We hugged the children and cried with them. We told them about the God who loves them and that God would help them return to this place and rebuild their lives.

God’s word will be fulfilled and will not return empty.

We fed people and gave them water. We went out between the air-raid sirens to find more food, water and toilet paper. And sometimes, we did not have time to return to the bomb shelter before the next siren sounded.

This work continued. As the air-raid sirens sounded, we often continued to stand in the queues outside because food was only available in small quantities.

Once, we were waiting for help from volunteers. They arrived as curfew was supposed to begin, and shelling had already started. They ran alongside our car, and we caught the bags of food they tossed to us.

More than anything, faith and courage are needed when people talk about their grief and the terrible things they are going through. Their words sometimes made me want to scream in despair. But you listen and repeat to yourself, “God’s word is being fulfilled.” Hug and cry with them. And then you start talking, and you talk about the One who can bring them comfort, about meeting him, about his Kingdom and about love, because this is what they really need.

And you do it because “God’s word is being fulfilled”.

And thank God there is still time for grace.

A time of grace in a war-torn territory

Youth Meeting with the General

The long-awaited moment has arrived!

The Whole World Celebrates the International Day of Older Persons

Kharkiv Corps is a space where children can warm their souls

Ukrainian children are back to school