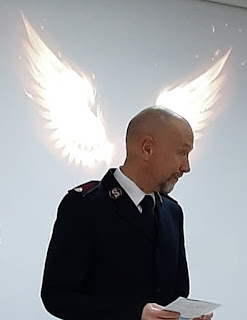 The question is valid. I grew up in a country where a picture was considered to be a solid proof when truth should be established. We know that this can be disputed, because pictures can be manipulated. Likewise, even without manipulation a coincident can have an effect that changes the ‘image’ completely.

Major Beat Rieder took these photos a couple of weeks back. When he showed them to us after the meeting, it created huge amusement. However, I straight away knew that I could use them to illustrate the last blog in this autumn’s series on the ‘attributes of Christ’.

The focus through the whole year has been on our mission to bring the life of Christ to people. To be able to that I need to know what the attributes of his life are. One way to discover this is to look at his “I am” statements. They are the images of who he is. Many times, I have also quoted the verse:

The consequence of this must be that the images of who He is should also be images found in my life. It is impossible to fake these images. Yes, I can dress like a ‘shepherd’; all the same, if I don’t care about the ‘sheep’ people will straight away know that the image lies.

Any of the qualities of the fruit on this list can be imitated for some time through human effort, but alas, unless it is genuine it will eventually be disclosed.

The interesting thing is that Jesus lived an ordinary life. He lived just like most of the people around him. He took part in their joys, their parties, their pain and their sorrows. He slept, ate and drank, laughed and wept. He had gentle conversation, and was angry when he saw unrighteousness – and all the time the attributes are part of who he is, because they are an integral part of his being.

Even though today’s illustration is not manipulated, angel-wings are not part of who I am. The image still lies and everyone knows that is the case. I pray for myself and for you that your life in this world will be genuine and true because we live as genuine and true human beings who believe that Jesus can work in and through us to spread hope in a world in need of hope.

Recreated in His image!

Can an image lie?