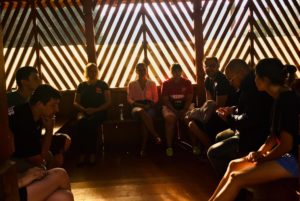 The “Time has Come” was a Candidate’s camp for youth organized by Divisional Leaders Majors Veacheslav and Elena Kotrutsa.  The special guests and speakers were  Major Valeriu and Victoria Lalac.

There were 43 young people (from all corps in Ukraine) and  12 officers and leaders.

The assembly enjoyed glorification and communication, going deep into the Scripture. Having explored all the local hills and rivers, the group wanted great peaks. It was time to conquer the highest point of Ukraine – Hoverla. On the 5th day, the “Time has Come” participants left the security  of their quarters in a town in the Carpathian Mountains.  This place, with a noisy stream and pastorals, suddenly became abandoned as all went to the mountains, even those that were unprepared. 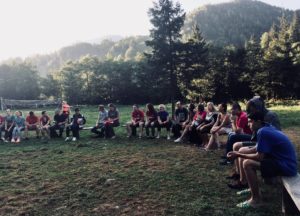 Upon ascent, we practiced what we prayed for, what we heard during seminars and in spiritual reflections and what we sang about in our songs – love, love of others’.

We focused on overcoming dissatisfaction and showing leniency. We were pleased with meager rations. We did not try to complete the ascent to the peak individually, but we were waited for those who were lagging behind. We encouraged and supported them. “I have never experienced so much love from the others as during the ascent to Hoverla!” (Tetiana Petrenko, Kiev Mayak Corps Leader, Kyiv).

Majors Lalac joined us exactly when we needed to have an independent, objective and honest opinion. This happened when many of the participants in the camp had already asked the question: “what time has come?”

Valeriu and Victoria told us the incomparable, inspired life story of William and Catherine Booth, the founders of the Salvation Army. They reminded us of the need for sympathy for the disadvantaged, expressed details of the mission creation from a new point of view, the Ministry , Finally, the words of the Founder, William Booth, that were an incredible force were again pronounced: 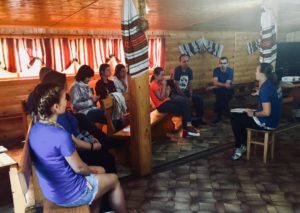 As long as the little children remain hungry, as it is now, I will fight!

As long as people get into prisons,  get released and get in again, and get out, as it is now, I will fight – I will fight to the very end! »

The time has come and many of the young people said the following words:

I want God to forgive me!

I want to fight against the sin in my life!

I know now why God created The Salvation Army!

I want to bring relief to those who suffer!

I want to love and take care of people in need!

I want to be in the ranks of the ministers!

I want to give Him all of me!

As an officer of The Salvation Army, a minister, a division leader, I am happy to hear similar words. They bring me to the heights, which are not comparable to the worldly one!

Glory to Jesus for His sacrificial love for us!

Glory to Ukraine – to the people who live here and for their indefatigable desire to know God and serve Him!

The Time has Come