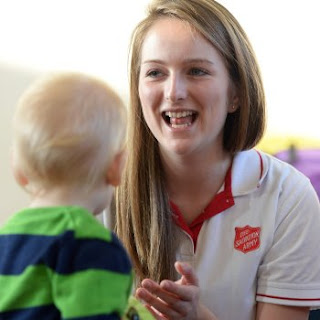 Hjørdis was not my ‘aunt’ in terms of being a relative. All the same, the children who attended the nursery-class at the Sunday school in Stavanger in the late 1950s called her ‘aunt Hjørdis’. I don’t know how many years she had been doing the ministry, but I believe it must have been for the major part of her life. For me she was always an ‘old’, but very important person.

Because my parents went to the ‘Battle-School’ to be trained for officership, I was only four years old when we moved from the city. However, I know ‘aunt Hjørdis’ remembered me, prayed for me and every time I came back for furlough, she talked to me – and I was one of many who received her care. I felt seen, loved and affirmed even when I was an adult and had become an officer myself. I don’t think she ever thought that she was one of the ‘great ones’ in God’s Kingdom, but when I read what Jesus said, I believe she was:

The memory of her was triggered by General Peddle’s: ‘Call to Raise and Nurture Every Generation’, which is the first point of the charge to take responsibility (1). Praise God, we still find people who are ready to be engaged and prepared to take responsibility for children’s ministry. The challenge is that they are ‘red-listed’ because they belong to the endangered species – particularly when we speak about a long-term ‘aunt Hjørdis-commitment’.

It is not so hard to get people to engage in a one-time event. However, in an ‘instant’ society where the benefit of having a multitude of options to choose from is considered the highest value worth striving for – we still need people who are willing to say “I am ready to welcome and invest in children!”

————————————-
(1) A Call to Raise and Nurture Every Generation: We must accept responsibility for children, young adults and emerging leaders – equipping, growing, empowering and discipling our present and future Salvation Army.
Where have all the ‘great ones’ gone?